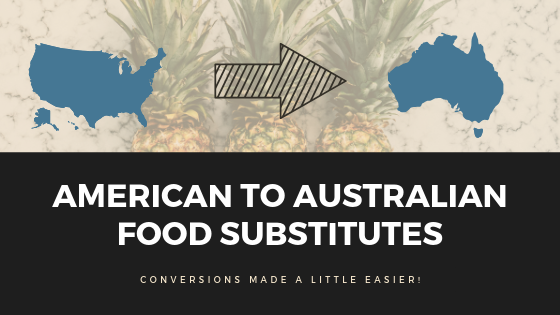 When I moved to Australia I never realised how difficult or impossible it would be to find some of what I would consider standard American foods needed in so many recipes! Here is a list of hard to find American to Australian food substitutes to make your cooking conversions easier when you can’t find that exact ingredient.

Also, check out my post on 5 Tips for moving to a Foreign Country.

I’ve had to do a bit of experimenting and searching to make some of my favourite dishes. Below are a few options for cooking substitutions that have worked well for me.

My first Thanksgiving in Australia I searched far and wide for a simple can of Libby’s 100% pumpkin. NO LUCK! Now I couldn’t go without my all-time favourite Thanksgiving treat, so I took the more difficult route of using fresh pumpkin. I’ve experimented over the years and have found I prefer the flavour of Butternut pumpkin then the other types of pumpkin that were available in the supermarket here. It’s really not THAT much extra effort to bake a pumpkin pie using fresh pumpkin, and so absolutely worth it!

I usually use 1/2 of a butternut pumpkin, steamed and pureed, in place of one can of Libby’s 100% pumpkin. I’ve also added in 1/2 of an orange sweet potato with the pumpkin and that works great too! Just make sure that after you steam the pumpkin to let it sit for a few minutes and let the excess water drip away so your pumpkin does not get too watery.

Another common American item I was devastated to not be able to find was the Graham Cracker! Now I’ll admit, there are no perfect substitutes for this one that I have found. Just skip the smores idea entirely. But if you happen to be needing a graham cracker pie base then there are a few different options. Try a digestive, marie or granita biscuit (cookie). You may need to add in a bit of preferred sweetener to the biscuit mix to get the taste a bit closer to the graham cracker.

Vanilla Wafers are also nowhere to be found in the general supermarkets in Australia. The closest substitute I’ve found for this item is Lady/sponge fingers. They have that light airiness about them similar to Vanilla Wafers.

Now another one of my all-time favourite snacks is the CHEX MIX! Silly me to think that I would be able to find your good old rice, corn and wheat Chex in the stores here. NOPE! They do have Crispix Cereal, which is the equivalent of the corn Chex. They do NOT however, have the rice or the wheat Chex….. Check out some of the other cereals to add to your mix – Nutrigrain works great.

So I know that Cool Whip is not the healthiest item added into a recipe but damn I love how easy it is! But alas, no frozen Cool Whip tubs in the frozen section. You can try just using some Thickened Cream and whipping it up with a bit of sweetener to taste. It works in some recipes but not in all… Oh, the sacrifices we make.

The last item on my list here is BACON! Seriously, how could this simple deliciousness be so different from one country to the next? If you’re needing that nice crispy bacon, then look for Streaky Bacon. Standard bacon here is more like Canadian bacon.

I hope that makes things slightly easier when adapting your American recipes when in Australia! Happy cooking!

Filed Under: Living Abroad
5 Tips for Moving to a Foreign Country
THE AUSTRALIAN SLANG YOU NEED TO KNOW

Searching is in progress